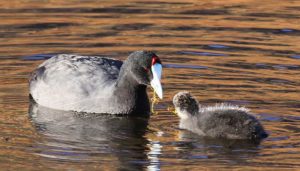 The Florence Bloom Bird Sanctuary is located within Delta Park, in Johannesburg. It had its origins in the late 60’s when the Waste Water Treatment Works were finally closed down and parts of the park were developed as Trefoil Park (a girl guide camp), a scout camp and a camp for the Voortrekkers. The local Witwatersrand Bird Club was in the process of having part of the park developed as a bird sanctuary and they approached the Bloom brothers (Harry, Norman and David) to become involved. Florence Bloom, their mother, a nature-lover, died in 1971 and the brothers each donated a bird bath in their mother’s memory to three Johannesburg parks: The Wilds, Melville Koppies and Delta Park. The Witwatersrand Bird Club invited the Blooms to establish a more significant memorial to their mother by assisting with the establishment of what became the Florence Bloom Bird Sanctuary. The 7,5 ha sanctuary was opened in 1975.

As the bird sanctuary had been neglected and run down for several years, the Centre, in conjunction with Jhb City Parks, sponsors, and volunteers, recently undertook a major revamp. About R150 000 was raised for the project which enabled the area to be re-fenced, the two hides were rebuilt to make them accessible to wheelchair users, and a programme was initiated to control some of the invasive alien vegetation in the sanctuary and to plant trees and shrubs attractive to birds. These activities have already shown positive results with an increase in the number of bird species using the sanctuary.

The Florence Bloom Bird Sanctuary is home to a surprising number of birds – with the 2 dams attracting various ducks, coots, moorhens and other water birds, as well as the odd kingfisher; the open veld sections attract bishops and weavers, guineafowl and francolin, and the areas of denser bush attract birds such as Willow Warblers, Great Reed-Warblers, and Tawny-flanked Prinias, sparrowhawks and owls. The park also seems to regularly attract highly unusual species and in the past seven years Madagscar Cuckoo, Longtailed Pipit, and Ayres Hawk-Eagle, amongst others, have been recorded.

Other animals also enjoy the safety of the fenced-off sanctuary – mammals such as Striped Mice and even Slender Mongoose and Large Spotted Genet can be found foraging around the park. Reptiles also occur and sightings of Rinkhals and Marsh Terrapin are not uncommon.

The sanctuary is a tranquil oasis less than half an hour from the centre of town and the opportunity that it offers visitors to spend a peaceful few hours enjoying the colour, activity and sounds of the birds as they go about their lives is something that we need to protect.